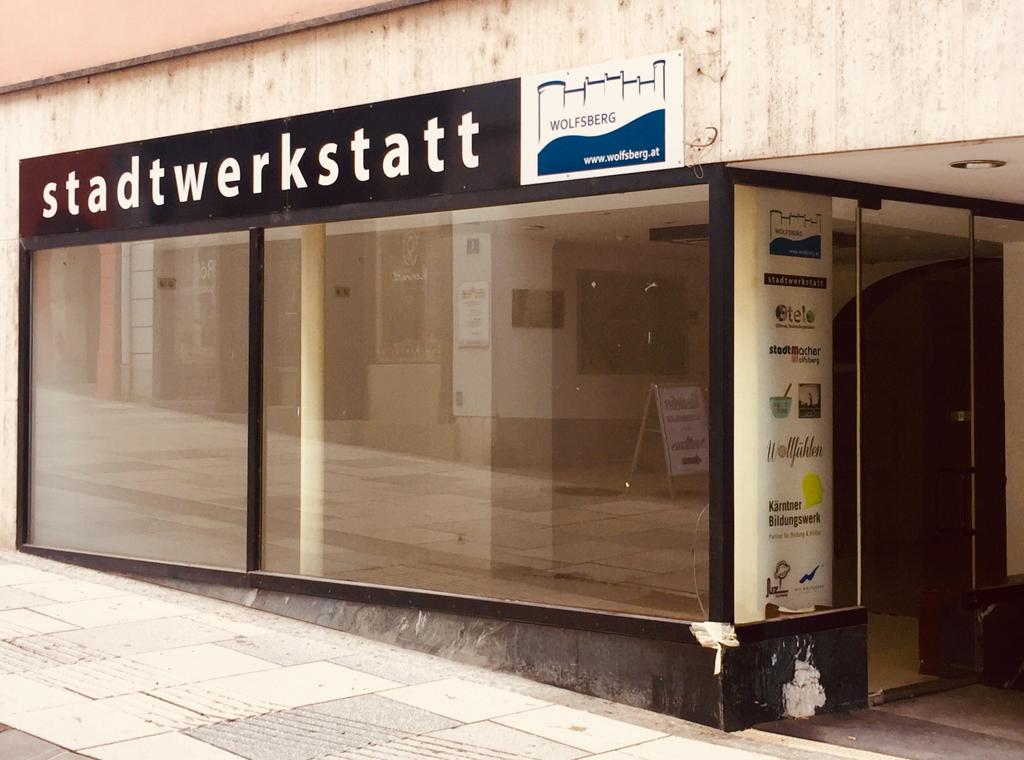 In the last 6 years there has been a creative form of vacancy use in Wolfsberg’s old town.

An empty work space, business premise and project office that has been rented by the city council under special terms since March 2014 for temporary use as a meeting place for exchanging ideas and communication for all Wolfsberg’s citizens, but also “Lavanttalers” in general. A public area for meetings, workshops, etc. outside the usual public space, which was created to draw attention to the respective vacancies, which was successfull. In the beginning it also served as a project location for the “Zukunft Obere Stadt” project, the associated events and thus a meeting place for ideas and suggestions for redesigning Wolfsberg’s old town.

It was the location for cooking workshops held by the “StadtmacherInnen”, music events, language courses and club meetings. Among other things, the quarterly Repair-Café took place there, a meeting of craftsmen and citizens where one could repair any number of things together, but also craft groups such as ‘Wollfühlen’ – a knitting group -, the “Patchwork Ladies” – a sewing group – and “Treffpunkt Literatur” (https://www.wolfsblog.at/en/culture/books-everywhere-you-look/) met there regularly. Recently one could have mistaken the “Stadtwerkstatt”, used as a temporary storage facility for excess books from Wolfsberg’s open bookcases, for a library and it served as an extended book box during other events.

How did the “Stadtwerkstatt” come about?

The “Stadtwerkstatt” was originally an idea of the Scan agency, an example of the creative handling of vacancies, which took shape during the first part of the accompanying process for the “Zukunft Obere Stadt” project. At that time there were a lot of vacancies in Wolfsberg’s old town and the mayor also wondered how they could be utilized. In other cities you could see a lot of creative ways for their temporary use, which paved the way for the “Stadtwerkstatt”. It was set up as part of his master’s thesis by Benjamin Melcher, together with volunteers and wood sponsored by KLH Wolfsberg.

Where were the locations of the “Stadtwerkstatt”?

The first location was at the top of the “Hoher Platz”, Johann-Offner-Straße 2, where today you can buy wonderful women’s fashion at Mode Harrys. This beautiful shop and the friendly owner Peter Harrys are a real asset to the old town.

Johann-Offner-Straße 1 was the second location where Andrea Buchsbaum (https://www.mrs-buchsbaum.at) announced at a ‘Wollfühlen’ meeting “I’m going to open my knitting café here” – a dream which came true for her in January 2018 when she opened Wolfsberg’s first vegetarian café – the Créafe, well-known far beyond the Lavant valley, which also attracted numerous former residents of Wolfsberg from Graz and Vienna.

From 2017 to the beginning of 2021, the Stadtwerkstatt was comfortably nestled between one of Wolfberg’s oldest shops, the Krasser hat shop and the rehearsal room of the men’s choir – by the way, also a redesigned shop in the shared space. Since all events had to be canceled due to Covid measures and it wasn’t possible to use the space sufficiently, the Stadtwerkstatt was shut down and the Kost-nix-Laden reopened here on May 3rd as the business location in the Bambergerstrasse was given to a permanent tenant and relocation was necessary. The opening times are: