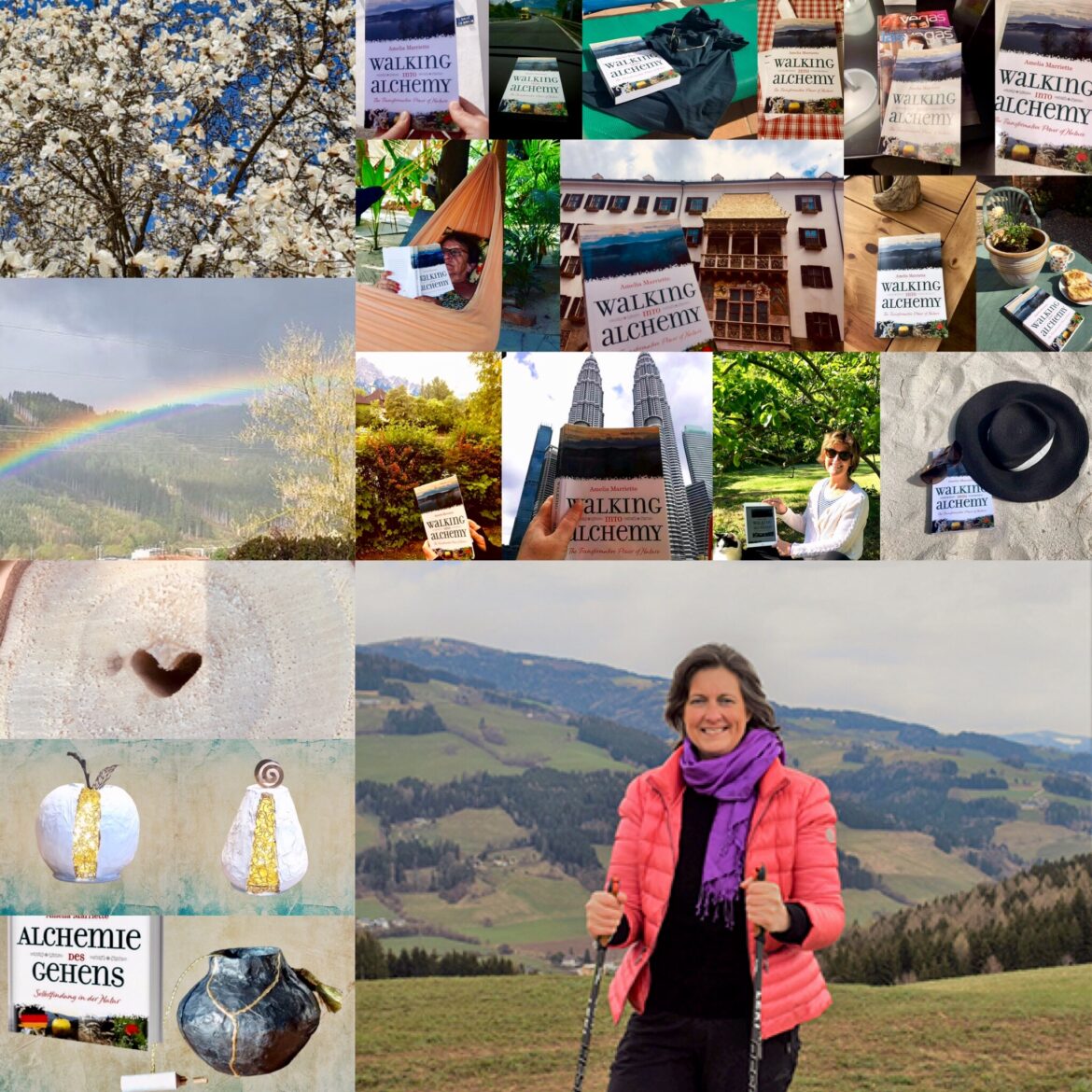 Those who visited the Sprich-Dich-Frei language institute’s “Jahres-SprachTisch” in Wolfsberg in 2016 and 2017 should be familiar with the name Amelia Marriette. For two years in a row Amelia, at the invitation of Myriam Robveille, impressed with her personal knowledge of William Shakespeare and Gustav Holst respectively. At another English SprachTisch in 2018 at Creafé Amelia read texts from her autobiographical book project and the positive feedback she received that evening encouraged her to finish her book. In 2019 her book titled Walking into Alchemy: The Transformative Power of Nature was released. This summer Amelia, who is now an integral part of the Sprich-Dich-Frei team, plans to self-publish the German edition as well, provided she reaches her financing goal through crowdfunding.

When the curator was still in Great Britain, she was going through a difficult time in her life when she met her partner Katie Gayle, who originally comes from Bad Sankt Leonhard. Katie left Austria 45 years ago as a young woman in search of new experiences and she ended up in Great Britain at the Epson School of Art and Design. In the end she completed her Master of Arts at the Royal College of Art in London, pursuing an international career afterwards. After the couple visited Austria together a few times, they decided to settle down in Bad Sankt Leonhard. Amelia was unemployed and frustrated with her life in England and Katie wanted to more easily be able to visit her mother in the retirement home in Bad St Leonhard. The couple has been living there since the end of 2015.

After relocating from England, the beauty of the countryside and the excitement of living in new surroundings distracted Amelia from her old worries, but soon new insecurities and health problems arose. Amelia didn’t know what to do, but her body did and said “Get outside and start moving”. She laced up her hiking boots and soon discovered the Q3 hiking trail, which led from Bad Sankt Leonhard past the village of Schiefling and to breathtaking views of the Koralpe and the Karawanken. Various plants, animals and an apple tree also caught her interest and she started to look at the world around her with more awareness.

At the turn of the year 2015-16 she had the idea to walk the Q3 track once a week for a whole year to see what such an endeavour might bring. In the end it was her book – Walking into Alchemy, which was published in English in 2019. Part nature and hiking guide, part love story and self-discovery journal, it has found a wide audience. During this formative year, Amelia and Katie also started working closely together. Amelia’s findings and observations and the corresponding exchange between the couple developed its own dynamic and this gave them both a new joy for life. Katie’s connection to Bad Sankt Leonhard is described in more detail in Amelia’s book. Among other things, you can also read how her family was involved in bringing the “Bad” into the name “Bad Sankt Leonhard”.

I read Amelia’s book during the first lockdown in spring of 2020 and it helped me not to lose my focus on the positives during this intense time. Amelia’s observations and insights have also motivated me to go walking in our wonderful natural landscape more often again. Today’s times are challenging for many people and exercising in nature can help to get a new perspective on things while also improving mental and physical health. A whole year of walking the same route has taught Amelia to perceive the world at her doorstep with new eyes, and her story is an inspiration for many readers all over the world. Now she wants to self-publish the book for release in Austria and other German-speaking countries. Amelia’s book is currently being translated into German by the Wolfsblog team and if her crowdfunding campaign is successful, the German edition Alchemie des Gehens: Selbstfindung in der Natur will be printed in autumn.

In order to finance self-publishing the German edition, Amelia’s crowdfunding campaign on www.startnext.com/ameliamarriette will be running until June 30th, 2021. On the website you can pre-order the German book, on its own or with high-quality products from the Lavant Valley, buy the english book or e-Book or simply support Amelia’s project with a donation. Any amounts pledged on startnext are only due when the goal has been reached and printed books will be sent to their buyers in October/November. As friends of Amelia who are also involved in the project, we welcome and appreciate any support!

Here are the links to the websites of everyone involved in the project: