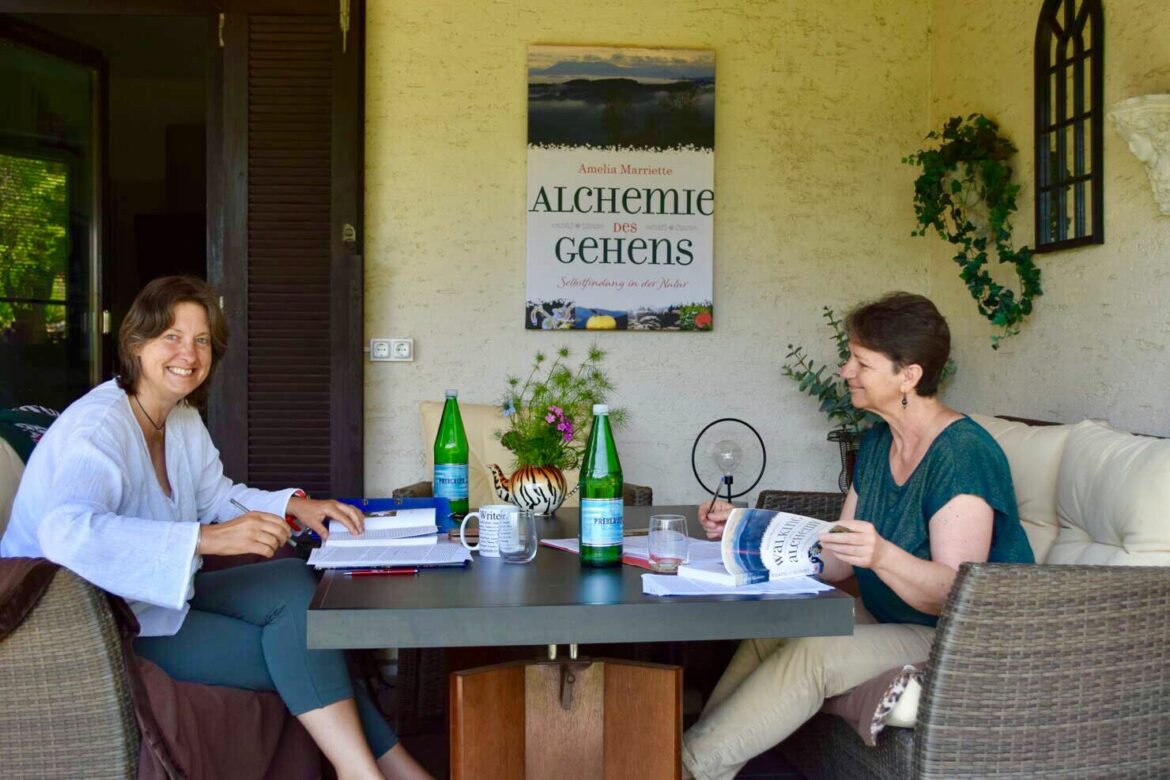 We wrote about Amelia and her crowdfunding campaign back in May. Crowdfunding is something you hear about more and more often, but it isn´t very well known yet here in the Lavant Valley. Supporters finance a project by either donating money or paying for something in advance so that the money is available to realise the project. In Amelia’s case the support was for the German edition of her book Walking into Alchemie: The Transformative Power of Nature. The book is about Amelia’s repeated hikes on the 21km long Q3 trail after her relocation from Great Britain to the Lavant Valley and the positive effects it had on her physical and mental health.

Amelia chose the platform Startnext for her crowdfunding project and their motto is “The future belongs to the brave”. Crowdfunding really isn´t for the faint hearted – should you not reach the amount specified in advance, you won’t get any funding at all in the end. Only after the goal is achieved within the time frame, in this case €10,000 in 3 months, are the donations and support from the donors collected. In this case, the sum covers the translation costs as well as the printing of 1,000 books.

The campaign remained exciting up until the last day on June 30th, when € 1,300 were still needed, but then a pre-order of 12 books from Oberrau, Bavaria came in as well as donations from Sparkasse Bad St. Leonhard and Preblauer Heil- und Mineralwasser Prebl. Finally, the Wolfsberger language institute Sprich-dich-frei with a pre-order of 30 books and a reading brought the campaign over the finishing line. Amelia was overwhelmed and wrote on her Startnext blog: “„What I take from all of this is that the love and support of the people in the town and from the surrounding area that I now call home have made me feel very happy and this will be my memory of the campaign – this is more than money can buy and more than I could ever have hoped for.“

Since then Amelia has been working with us and a team of proofreaders on the German translation and at the moment all 61 chapters of the book are being edited and designed by Amelia´s publisher, Mereo in Great Britain, so that the book can then be printed here in the Lavant Valley by the Theiss printing company. In November, the supporters will receive their pre-ordered copies of Amelia’s book Alchemie des Gehens: Selbstfindung in der Natur and it will also be available at readings and in bookshops. You can also pre-order a copy by emailing: ameliamarriette@gmail.com.

Amelia felt motivated to go far into nature, again and again for a whole year, in all weather conditions and all four seasons. She had a lot of time to reflect and wrote down her experiences and thoughts openly and honestly. She released the book in English in 2019 and it has been read in many countries around the world. She asked others for help in realising her dream of a German edition so that it could be read in her new home. She put her book into the hands of people whose language she is still learning for the translation . She has really proven that: “The future belongs to the brave.”