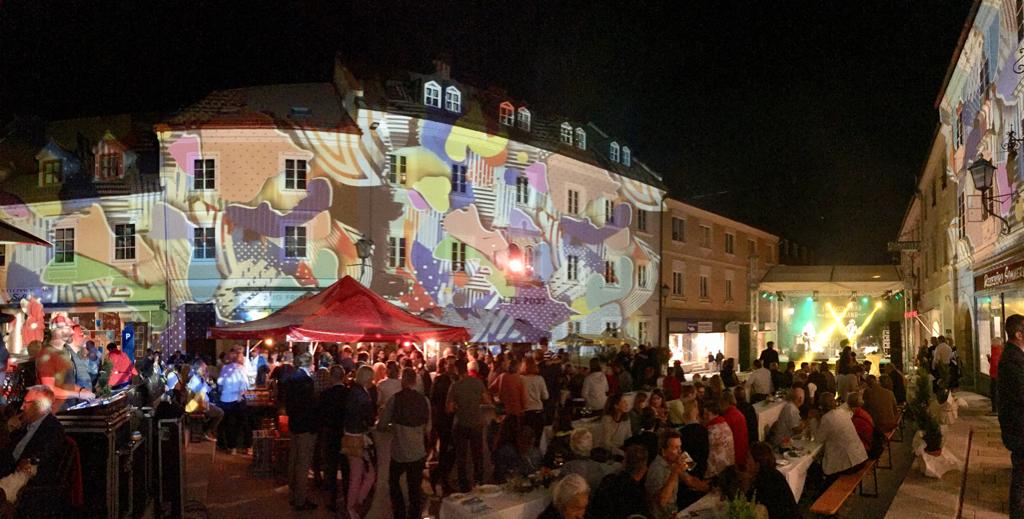 In 2011 I visited Bassano Del Grappa in Italy with friends and I was amazed by how many people were walking around the piazza there. Older people, young families, young people, couples and friends strolling around and no cars in sight – because on Thursday and Saturday the square becomes a pedestrian zone for the market. I asked myself why there isn’t such a square, such a meeting place in our district capital Wolfsberg. In several conversations with other Lavantaler residents I noticed that others also long for such a place. When we go on vacation to other countries, other cities, that seems to be one of the first things we look for – the main square, the piazza or the pedestrian zone. A place where people hang out, where shops, cafes and sights are found and where you can experience the city and its people. In the years that followed, I noticed again and again how much such a square enriches a city, especially if it is located in the old part of town. We have a well-preserved old town in Wolfsberg and while working as a local city guide I have often noticed that visitors appreciate it much more than the locals, who often just drive through it.

In 2014 a renovation of the upper city was due – the pavement and everything underneath, as well as power lines, internet connections, water pipes etc. The project `Zukunft Obere Stadt’ (‘Future Upper City’) was launched, which meant not only renewing the upper city, but completely redesigning it to increase the quality of living, to make vacant shops more attractive again and to revitalize the old town. A competition for this was announced, which was won by the architectural office Balloon from Graz (Johannes Wohofsky, Benjamin Melcher, Michael Leiss) in spring 2015. The architects described their concept as “Wolfsberg’s living room”, a barrier-free shared space, such as those found in Bruck an der Muhr, Bad Radkersburg and Hartberg, for example.

A shared space is not just a design concept, but also an approach. A street without traffic lights, traffic signs and markings such as crosswalks, where there are no curbs to mark sidewalks, cycle tracks and lanes. The philosophy behind it is that the absence of these signposts forces to orient oneself by means of awareness and eye contact, which is intended to slow down traffic and promote interpersonal contact. On traditional roads where these classifications exist, traffic participants are lulled into a false sense of security, especially those who sit safely in their cars and often seem to believe the road belongs to them. The idea of the shared space originally came from Holland, where the inventor Hans Monderman began his career as a traditional traffic engineer.

The concept was published in autumn 2015 and citizens were invited to contribute their ideas and suggestions for the `Zukunft Obere Stadt` project. This citizen participation process was presented by Elisa Rosegger Purkrapek and Rainer Rosegger from the Scan agency (market and society analysis), who were presented as project supporters. In the following year there were roundtables, presentations, meetings and events on the topics of traffic, vacancies, function and design, culture and youth. At the same time, the “Stadtwerkstatt” was set up, one of the aforementioned vacancies that was rented by the municipality and redesigned by Benjamin Melcher as a venue for such meetings. Notable was that during the discussion of almost all topics traffic turned out to be a point of contention. On one hand, citizens wanted to continue to park directly in the old town and drive through it without restrictions. In addition, some business people were convinced that shops in the old town would not be sustainable without enough parking spaces. Others, however, longed for an area with less traffic – a place to linger, with more people and quiet instead of cars and noise, a so-called “living room” in the city. Nevertheless, the discourse always remained open and productive, especially thanks to the neutral project support provided by the Scan agency.

Projects such as “Metamorphose”, “Bunte Küche” and the “StadtmacherInnen” emerged from this public participation process. “Metamorphose”, an annual festival with music and lighting in the old town based on the idea of Bernhard Teferle, unfortunately never came about in this manner due to a lack of funding. Still, it was the inspiration for the unique and very successful lighting of the buildings on the “Hoher Platz” at the opening ceremony in September 2019 and for the ‘Open Air’ days of the ‘Stadtmacherinnen’ which took place in May 2018 and 19. In summer 2016, 17 and 18, the “Bunte Küche” organized a number of charity events under the motto “People come together when they eat”. Dishes from all over the world were prepared by locals and “Zurgraste” who then ate together on a long table, the first two years on the “Hoher Platz” and the third year – because of the construction site – in the Bambergerstrasse. By now, the “Bunte Küche” has become an integral part of the “StadtmacherInnen”.

After two intense construction phases in the summer of 2018 and 2019, the renovation of the “Hoher Platz” is largely complete, only mobile plant troughs and other shade providers such as sun sails are left. On a scale of “I don’t like it at all” to “It’s wonderful”, all opinions are represented, but at the opening ceremony in September 2019 there seemed to be much joy and a lively atmosphere. A “Hoher Platz”, animated by light, people, and music was a rare and hard-to-forget sight. A week later the “Ku-Ku-Ma” (culinary culture market) was officially opened as a sign of the revitalization of the “Hoher Platz” – Wolfsberg’s long-awaited Saturday market, which has now celebrated its one-year birthday with seemingly satisfied producers, sellers and consumers. The street is closed for the market on Saturdays from 9:00 a.m. to 1:00 p.m. and the “Hoher Platz” becomes a pedestrian zone from Bardel Eck to town hall.

In terms of bustle during the week, however, not much has changed since the redesign. The majority of business operators in the old town are happy about the new square, some saw it as a reason for renovation, but some still complain about too little business and believe that fewer parking spaces have made the situation worse. But if you watch the many drivers who drive over the “Hohen Platz” and past the empty parking lots, that is hard to imagine. This passing through – usually faster than 20km / h – in contrast to lingering or at least showing enough consideration for pedestrians is in my opinion the biggest obstacle to the success of the shared space. As an alternative to the 30-minute short-term parking zones directly at the “Hoher Platz”, there are enough parking spaces: the Bleiweißparkplatz (4-5 minutes on foot, partly free of charge), the Minoritenplatz (2-3 minutes on foot), the Johann-Offner-Straße (2-3 minutes on foot), Getreidemarkt (1 minute walk) and the Rathausparkplatz (4-5 minute walk, partly free of charge).

When I walked across the “Hoher Platz” at the first annual celebration of “Ku-Ku-Ma” on September 12th and watched the many happy faces, I realized that we in Wolfsberg now have exactly what I admired in Basano Del Grappa and missed here – a place to meet people and stroll, for tourists and locals. A pedestrian zone with a market, shops, cafes and sights where you can experience our city and its people, at least every Saturday.